The first prize for out standing dancer in the Mia Arbatova Ballet Competition, is presented in the memory in the late Jeannette Ordman, who left her stamp on the Israeli dance scene for forty years.

Jennette Ordman founded the Bat- Dor school of dance in 1967 together with the late Baroness Batsheva De Rothschild. The following year, they created the Bat -Dor Dance Company in order to enable Israeli dancers to perform professionally. For many years Ms. Ordamn was principal dancer of the company. From the opening of Bat- Dor until its closing in May 2006 she also served as Artistic Director. 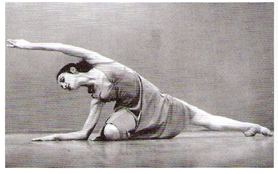 At the same time she over saw the dance school and students. Both the Dance Company and school blended classical dance techniques with those of modern dance.

Jeannette Ordman had a vision- to create the foundation of a professional, international-caliber dance community in Israel. To achieve her vision, she developed Israeli young dancers in the Bat- Dor Dance School and integrated the best into the Dance Company, which included in its ranks dancers from around the world in addition to Israelis and new immigrants. Jeannette also brought great choreographers and teachers from overseas to instruct at the school and to work with the Dance Company. She blazed a trail with her determination and her uncompromising devotion to quality, contributing significantly thereby to the flowering of dance in Israel and to the wider world.
Jeannette believed deeply that success demanded not only talent but also discipline, persistence, dedication, hard work, and commitment. As a teacher and mentor, Jeannette instilled these values in her students and dancers, and they reciprocated with their appreciation and esteem.

This prize is intended therefore to commemorate Jeannette Ordman and her contribution to the dance world in Israel, and to perpetuate her vision.